If you get my 90’s music reference in the title, then you are my age and you have fantastic taste in music. The birds are chirping, the flowers are blooming and the poison oak/sumac/ivy is creeping. Happy spring! Thought I would address a few common concerns and questions about outbreaks with poison oak or ivy. My frame of reference is poison oak now, but most rules apply equally to poison ivy and poison sumac.

What? Poison oak has a irritating sap called urushiol which is in the stalk and leaves of the plant. It’s common in wooded areas or around trees or fence lines. If there is nature around, it can be there.

Who? About 75% of us are sensitive to the urushiol and will have an allergic reaction when it touches our skin. There a few lucky ones out there who are “immune”. They need to come over and weed my garden, since I’m genetically unable…

How? The first time the sap touches our skin we won’t react. It’s only after our body ‘sees’ the sap again, and recognizes it, that it will form an allergic reaction. Anywhere the sap touches your skin can break out in a rash. You can’t spread the rash on your own body, unless you do not wash the sap off your hands or other body parts. Scratching the blisters or rash won’t cause new areas to break out.. that’s a common misconception. However, if you don’t wash your garden gloves/shoes/dog after any of those things get into the sap of  poison oak, you can acquire a rash from touching them again.

Now what? First, stop scratching. It only makes you feel worse and prolongs the problem. Next try an over-the-counter cortisone cream (I like Aveeno 1% Hydrocortisone Anti-itch Cream) for extreme itching, or put your moisturizer or aloe in the fridge before applying for extra itch relief. If you have an extensive break out or spots near your eyes or other sensitive areas are involved, best to see your doctor to makes sure you don’t need an oral steroid. Commonly doctors give a short burst of 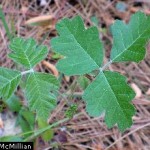